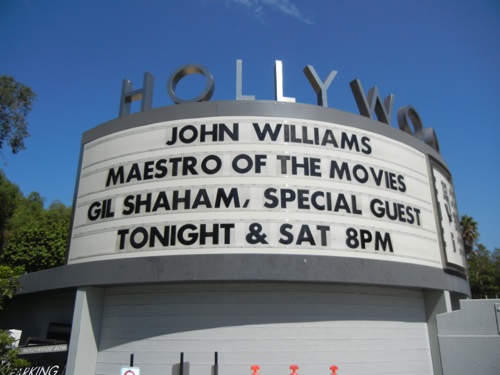 VIDEO: John Williams conducts the Los Angeles Philharmonic Orchestra August 31 at the Hollywood Bowl in a live accompaniment to the last 15 minutes of E.T. The Extra-Terrestrial.

The evening stars gently caressed the soft Summer breeze over The Hollywood Bowl. We arrived at the arena at seven thirty, approximately thirty minutes before the scheduled start of the much anticipated concert. The annual two night event under the stars of Hollywood had begun the previous night with a wildly popular sold out event. Now it was our turn. The brightly lit marquee on the street proclaimed yet another sold out concert. We anxiously claimed our seats, and sat quietly, awaiting the start of the concert in reverent expectation. At one minute past eight in the evening, the lights of the amphitheater began to dim and the audience applauded and cheered. The concert master strode across the stage, taking his place among the members of The Los Angeles Philharmonic already seated on the platform. As Maestro John Williams emerged from the curtains in his white tuxedo jacket, the cheers from his adoring fans erupted into a fever pitch of adulation. After the introductory interlude of The Star Spangled Banner, the audience took its seats and the concert began in earnest.

The program began with “A Salute To The Olympic Games.” The concert suite, accompanied by video clips supplied by NBC Sports, included “Bugler’s Dream” by Arnaud, “Olympic Fanfare and Theme,” “Song For World Peace,” and “The Olympic Spirit,” all composed by Maestro Williams.

The next phase of the program began with the sublimely haunting “Dartmoor, 1912” from Steven Spielberg’s “War Horse.” Williams’ performance of his own work was eloquent and moving. This symphonic poem was followed by Williams work for another recent Spielberg motion picture, “The Duel” from “The Adventures of Tintin.

After several moments of generous applause, Williams introduced his guest soloist for the evening, violinist Gil Shaham. Their first shared performance on stage began with Gardel’s “Por Una Cabeza” from “Scent of a Woman” with a special arrangement by Williams. Their next duet featured, perhaps, the most moving performance of the evening, Williams’ own exquisite composition from “Schindler’s List,” the inspirational “Remembrances.” Shaham’s flawless virtuoso interpretation of the composer’s passionate testament to the torment of European Jewry was received with tear stained reverence by a visibly moved audience at The Hollywood Bowl. The first half of the concert concluded with a joyful suite from Bock’s “Fiddler on the Roof” adapted by Williams.

After a relatively brief intermission, the lights of The Hollywood Bowl dimmed once more and the second half of the concert begain. If the earlier portion of the program had been respectfully dignified, no such illusion would permeate the concluding selections of the performance. As the opening strains of “The Superman March” electrified the crowd, light sabers arose in the darkness, burning through the evening in impassioned excitation. Pulsating in unison with the conductor’s baton, Williams’ devoted fans screamed in joyous fervor as they happily emulated the familiar strokes of his rhythmic performance. This was what the audience had come to see and hear.

Following “Superman” was the beautiful “Marion’s Theme” from “Raiders Of The Lost Ark,” the popular first entry in the original “Indiana Jones” trilogy. The eloquence of Williams’ love theme resonated wonderfully, wistfully recalling the innocent purity of romance and first love.

The next section of the evening’s program was, perhaps, the most powerful and energizing of the night. Comprised of members of The Cal State Fullerton University Singers, a large choir entered the stage and took their places, presenting “Three Selections for Chorus and Orchestra.” The segment began with a performance of Williams’ “Call of the Champions,” a majestic and spectacular interpretation of a superb piece of orchestral scoring. Following “Call of the Champions” was a truly stirring and emotional performance of “Dry Your Tears, Afrika,”from the fabulously evocative score for Steven Spielberg’s savage exploration of slavery in America, “Amistad.” The musical trilogy concluded with the stunning “Duel of the Fates,” Williams’s spectacular finale to the George Lucas production “Star Wars: The Phantom Menace.” Its powerful inclusion in the program elicited screams of delight from the eighteen thousand fans in the stadium.

The last segment of the “official” program consisted of a technically daring and brilliant recreation of the last reel of Williams’ and Spielberg’s poetic science fiction masterpiece, “ET, The Extra Terrestrial,” in which the final fifteen minutes of the motion picture was projected upon the giant stadium screen to live accompaniment on stage by John Williams and The Los Angeles Philharmonic in perfect synchronization. It was an amazing, and emotional enactment of the original scoring sessions to the classic soundtrack. This stunning performance was evidently inspired by a 2002 theatrical restoration of the film at The Shrine Auditorium in Los Angeles in which the composer conducted the entire soundtrack live on stage as the film unspooled before a “live” audience. This wondrous performance brought the program to its conclusion. However, as with all Williams concerts, several encores remained.

The concert ended finally with the beloved composer waving affectionately at the audience and walking off stage. As the lights returned and the assembled musicians gathered their instruments together, my brother Erwin and I walked quickly down the stairs past the platform toward the stage door. Eighteen thousand music lovers were preparing to leave the amphitheater, but only a relative handful would soon experience the joy and honor of being admitted back stage to the dressing room area of the vast outdoor auditorium. Juliet Rozsa (daughter of three time Oscar wining composer Miklos Rozsa) and her daughter Nicchi, to whom we owed this debt of kindness, joined us in line as we entered the bowels of The Bowl. There, before us, stood the master…the Maestro…the beloved composer conductor of “Jaws,” “Star Wars,” “Close Encounters of the Third Kind,” “Superman,” “Raiders of the Lost Ark” and all of the Indiana Jones films, “ET, The Extra Terrestrial,” “Jurassic Park,” and “Harry Potter.”

Juliet introduced me to Williams, as she had done so generously two years earlier. I had seen John Williams “live” in concert twice in Philadelphia, and now three times additionally at The Hollywood Bowl in Los Angeles. This would be the third year in a row that we would share the honor of meeting and speaking with this supreme composer of music for the movies. At last year’s concert aftermath, Williams had recognized me in line, pointing his finger in my direction and exclaiming “I remember you.” This year he actually remembered my name and called me “Steve.” As we spoke, I told him that I am now sixty six years of age and that I have loved him since the age of thirteen. He said “You’re still a child compared to me.” (He celebrated his eightieth year in February of this year.) I held a package of articles I’d written about him over the years, and he asked “Is that for me?” I answered in the affirmative, handing him the package and noting that a few of the enclosed articles were written more than thirty years ago. He frowned in mock consternation, acknowledging the passage of years on both our behalfs. I reminded him that I’d given him my published magazine article on the careers of Alfred Hitchcock and his principal composer Bernard Herrmann a year earlier. I asked him if he’d read it. He assured me that he had, and that he had enjoyed my work. As he looked at this newest parcel of commentary on the world of motion picture music, he looked at me and said “I promise you that I’ll respond this time.”

As we parted company at last, I told the Maestro that I was eagerly looking forward to his newest work, the score for Steven Spielberg’s “Lincoln,” premiering later this year. He smiled and said “I think that you’re really going to like it.” I told him once more that I loved him, and left the dressing room area with stars in my eyes, and in my heart…realizing the enormity of the honor I’d shared. It was a night to remember and to cherish for many months to come. 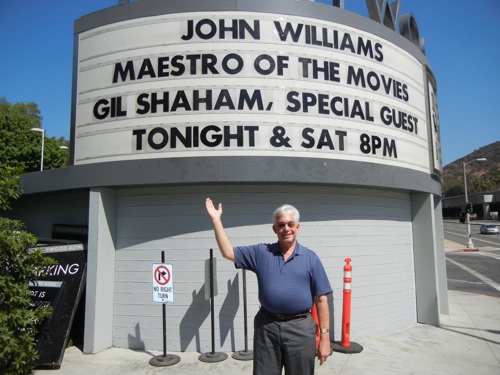 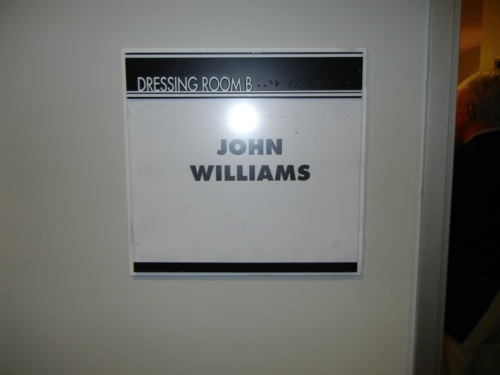 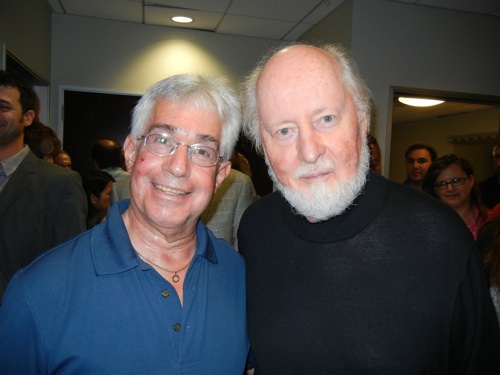