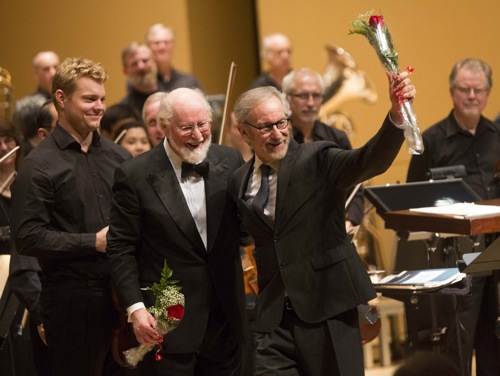 I was sitting in the fourth row, behind the orchestra pit seats, and it was a wonderful evening. To give some background, I attended one of the Film Nights at Tanglewood two years ago, and the 80th birthday concert at Tanglewood this summer. The Film Night I went to was Spielberg themed, although Spielberg wasn’t in attendance, so as much as I enjoyed it I missed hearing Star Wars, Harry Potter, or Superman, and was really hoping for some of those last night. I was also hoping for Tintin and War Horse, and maybe Lincoln. Alas, Lincoln was a no-show but otherwise the program was fantastic:

Tribute to the Film Composer – a big montage of film clips, a few seconds each, with accompanying score. Some of the clips included Star Wars, Titanic, Psycho (like Jaws, this got a laugh from the audience), Rocky, Bridge on the River Kwai, The Magnificent Seven, and ET, which segued into Gone with the Wind for the finale. As the concert was held on the same street where Gone with the Wind was written and had its film premiere, this was a great note to end on. The screen went off for the next few pieces, which I was grateful for.

Suite from Far & Away

Hedwig’s Theme – At this point Williams addressed the audience, saying this was his first time in Atlanta since the 1996 Olympics. That made me feel awfully lucky to be at this concert. He then announced the next three pieces, all from Harry Potter, meaning all my dreams were about to come true. He described Hedwig in what I’ll call a very archetypal sense, as a “great, white bird who delivers the mail.”

Fawkes the Phoenix – The highlight for me, as this is one of my favorites and I NEVER would have guessed he’d play it last night. It was also great to hear it the day after listening to the complete Chamber of Secrets score for the first time!

Harry’s Wondrous World – Accompanied by some clips from the first four films.

Dartmoor, 1912 – Great to hear in concert. Very lush and sumptuous, and the solos were beautiful

Star Wars Main Title – The main event for me, along with Harry Potter. It was a great reminder that this is why I loved Williams in the first place. The orchestra gave the most powerful performance of the evening; the blasts during the star destroyer attack are so striking, almost primal, compared to the rest of the material in the program. I was also amused to see Williams mouthing the drum hits in the direction of the percussion section in the last few seconds of the piece.

Jaws – As usual, the audience laughed at the opening notes. This piece wasn’t listed in the program.

Close Encounters – At last, Spielberg entered, introduced by Williams. He introduced each piece for the rest of the evening, except the final encore, and between each piece he went and sat in a chair on the side of the stage. Most of his introductions didn’t give us much info we didn’t already know, but of course they were welcome anyway, and it was fun seeing his and Williams’ camaraderie. “I love John Williams,” quoth he. The Close Encounters piece was played to clips from the end of the film.

Indy’s Very First Adventure – I hadn’t expected to hear any Indy other than the Raiders March, so this was a really nice surprise. Spielberg and Williams stood and watched the screen as the whole train scene from Last Crusade played, sans music. The audience was very responsive and laughed uproariously at all the gags, with Spielberg himself laughing at all the jokes too. They played the whole scene again with accompaniment from the orchestra; I was struck by how meticulously Williams planned and timed all the little touches in that cue, like the motif for the cross of Coronado, but how quick and effortless he makes it look while conducting.

The Adventure Continues – Introduced as “The Duel” by Spielberg, and presented with a montage of “swashbuckling” film clips. The clips were pretty distracting to be very honest with you. But I was pleased to see one from Muppet Treasure Island.

Adventures on Earth – around the end of the piece I could see Spielberg tapping his hand, clenching a fist, etc in time with some of the big orchestral flourishes.

Sugarland Express – Haven’t heard the score, so I don’t know the name of the piece, but it was a nice detour from the rest of the evening and featured a flute solo for pretty much the duration. I thought Lincoln would make a nice bookend with this, but instead we got…

The Raiders March – To thunderous applause. This was the only time throughout the evening where I could find fault with the performance; the tempo was a little slow, although I assume that was Williams’ preference. Nevertheless it was a great way to end the evening.

Other details… Star Wars and Schindler’s List both got ovations. There was a snobby guy behind me before the show who was asking his friends who would be conducting, and insisted that John Williams “doesn’t conduct.”

I brought my Raiders LP to try for an autograph, but both of the big dudes got in SUVs inside a huge garage in the building, so there was no chance. I did meet some other fans with really impressive and humbling posters covered in Star Wars cast and crew autographs. Someone told me Williams had been in Atlanta all week. According to one of the staff, he was flying out the same night. The highlights of the evening for me were the Harry Potter music, the Star Wars theme, War Horse, and Indy’s Very First Adventure. After only seeing Williams conduct once before, and from very far away, and omitting some of my non-Spielberg favorites, this concert was really special!