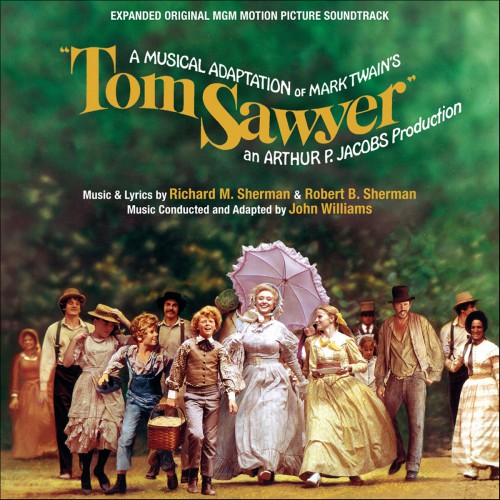 Quartet Records and MGM are proud to present an expanded 2-CD set featuring the delightful songs composed by Richard M. Sherman and Robert B. Sherman (Mary Poppins, The Happiest Millionaire, Bedknobs and Broomsticks), supervised and conducted (with background score composed by) the legendary John Williams.

Ten original Sherman Brothers songs (plus the instrumental Overture and Finale) were released on LP by United Artists at the time of the film’s premiere, but some songs were truncated, and a lot of reverb was used in the mixes (the orchestra is almost nonexistent behind the songs). The same program was reissued on CD in 2004 by Varese Sarabande, but sadly the tapes were transferred at incorrect pitch and speed—and the underscore composed by John Williams was still almost entirely missing.

While preparing this new reissue with a proper transfer, we were lucky to find, mislabeled, the 16´´ multi-tracks (eight channels for orchestra, eight for voices) including previously unreleased material. The slightly expanded album has been restored by Chris Malone and remixed by José Vinader, and offered here in full stereo. In the multi-tracks we found not only the original (uncut) version of “Hannibal-Mo,” but also some portions of the underscore. We have also used this opportunity to offer the songs in their instrumental-only versions, where you can appreciate the wonderful orchestrations of Mr. Williams, reminiscent of the Americana sound of The Reivers or The Missouri Breaks.

On the second CD we have included all of the songs heard in the film (in their original, complete form) plus the entire underscore. Unfortunately, the only available source was the mono music stem preserved by MGM. Not the best source, and although it showed signs of deterioration and some distortions in the voices, it has been carefully restored and mastered by Doug Schwartz at Mullholland Music, and it is the only way to finally have an archival edition of this wonderful score.