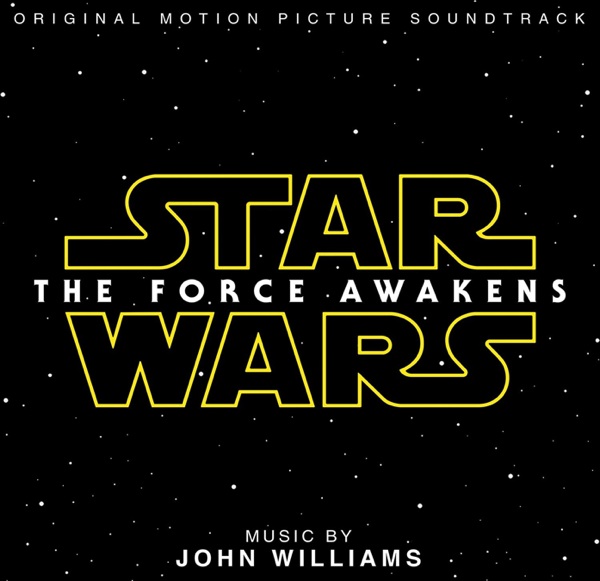 Review of the Soundtrack Album
by Mikko Ojala

John Williams in a galaxy quite close to us had an unenviable task of composing the score for the newest installment in the franchise, Star Wars: The Force Awakens. Expectations and anticipation could not have been higher for both J.J. Abrams’s film and its music, with film music and Star Wars fandom waiting with abated breath and hoping for something great, even a masterpiece, to come out of this seventh entry to the saga. The film is set 30 years after the events of Return of the Jedi and, once again, the peaceful Republic is teetering on the brink of war as a new threat. A military power known as The First Order under the leadership of mysterious Supreme Leader Snoke has emerged, and is fighting the opposing Resistance over the control of the galaxy. And just like the film, the new score contains many elements of what has come before but here was also a chance to begin again, to make a fresh start. And how does this new beginning sound? Well, it is not a return to the 1970s or ’80s sounds as Williams has changed significantly as a composer in the intervening decades, so it would be a tad unrealistic to expect this to be an entirely throwback time capsule. Instead, it could be said to be a combination of Williams’s modern post-2000 stylistic tendencies featured in the Prequels and his subsequent scores, and his older style exemplified by the feel of extrovert energy and adventure that is closer to Star Wars than Revenge of the Sith. And this is complimented by the lovely lyricism that harkens back to the original 1980s scores, although expressed through the kaleidoscope of modern John Williams sound.

The Force Awakens actually brims with energy and at times sheer optimistic fanfare laden bombast that was absent from the previous three films due to their dark subject matter. The old themes for Luke, the Force, Leia, Han Solo and Leia and the Rebel Fanfare return sprinkled throughout the score for good measure and effect, and Williams most of the time provides new fresh variations on them but also addresses the nostalgia with familiar settings at key moments. A whole slew of new themes come into play from the first moments, and while it might take a few listens to fully recognize the tight interweaving of all these ideas, they slowly but surely make their way into your head and, most importantly, your heart, and showcase the maestro’s continued skill at writing memorable tunes that fit comfortably to the fabric of the Star Wars’ musical universe.

Main Title and the Attack on the Jakku Village opens with a slightly differently orchestrated main title, with a bit more wetness and space to the recording which gives the reintroduction to the Star Wars universe a suitably fresh feel, and is followed by a terrific militaristic action piece which exemplifies the oppressive power of the First Order and introduces the imperious fanfare theme for our new villain, Kylo Ren. It also showcases the combined forces of the Hollywood Studio Orchestra, whose performance is spirited and nuanced, the orchestrations and recording very articulate.

Solo oboe opens The Scavenger, a piece devoted to another new character, Rey. She is one of the heroes of the story, who is portrayed beautifully by this initially flute-led centrepiece theme of the score, which is fully fleshed out in the Rey’s Theme concert suite on the album and appears throughout the score as central musical thread. It’s a gorgeous complex musical idea, that feels like Williams’ new counterpart to Leia’s and Force themes, expressing vulnerability, resilience and strength with equal measure in its different variations. Highlight appearances of Rey’s theme include the fiery version burning with anguished drama building from the Force theme in Maz’s Counsel, while Kylo Ren’s dark secondary theme sweeps her music to a tragedy-laden and desperate rendition in The Abduction. It appears in a grand dramatic action settings heard in The Ways of the Force, and dominates the finale tracks of Farewell and the Trip and Jedi Steps and Finale.

In general it could be said that the action scoring on the soundtrack falls into two categories: Firstly there is the more modern propulsive pieces created to inject drive and urgency to the hectic action sequences, where familiar urgent strings lines from the Prequels and other modern Williams scores churn away with dizzying ostinati and peppered by orchestral hits and tense brass. Interestingly, Williams makes even these ostinati thematic as he forms Finn’s theme around one of these figures and the ex-Stormtrooper’s music is always filled with alarm and tension, always on the run. It is first introduced midway through Follow Me, which is a quick musical dash culminating in the good old Rebel Fanfare, now repurposed as a theme for the young heroes, the Millenium Falcon and their nick of time escapes. This hectic action ostinato keeps popping up with the Rebel theme through the action tracks, like the frantically fleet The Falcon, and the percussive and rhythmically relentless The Rathtars!. As another example of this style, Kylo Ren Arrives at the Battle features superb frantic action string figures interspersed with Kylo Ren’s own exclamatory brass theme.

The other brand of action music present on the album is closer to Williams’s older style of action ballets, where a central action motif running through the setpiece is surrounded by thematic statements. I Can Fly Anything offers the first true action setpiece on the album, a thrilling tour-de-force (pun intended) for brass and strings with Poe Dameron’s heroic flying motif appearing midway through it. The Way of the Force pits Kylo Ren’s ominous two-part theme with the above mentioned Rey’s theme and the Force theme in a classic piece of angrily rhythmic duelling music, and the wonderfully named Scherzo for X-Wings lets it rip with galloping motif for the full orchestra that is brilliantly supported by the fantastic brass chorale statements of the Star Wars main theme that have not sounded this rousingly heroic in a long long time, and are sure to bring a smile on the face of John Williams and Star Wars fans.

While Williams mostly addresses the story with openly operatic terms, there are few more subtle emotional beats featured on the album, like the elegiac lament in The Starkiller, the composer delivering the tragic emotion with restraint for a chilling scene, stylistically resembling quite a few of the laments he has penned for the Prequels and other more recent scores like Lincoln and War Horse. Hints of this music is also woven into Torn Apart, that is a carefully constructed piece of drama for a pivotal scene in the film that gently guides your emotions during the opening half, with poignant string writing before exploding into deliciously operatic thematic action piece. Snoke draws parallel with the Revenge of the Sith opera scene for which Williams composed a very similar piece for the lowest possible male voices. Here they are heard slowly chanting Sanskrit lyrics taken from a Rudyard Kipling poem, but instead of providing the listener with a solid discernible theme for the Supreme Leader, the effect, while in itself singular, is alas mostly atmospheric. Finn’s Confession surprisingly reworks a minor thematic idea from The Phantom Menace and pairs it with Rey’s music into a lovely personal musical moment.

Another one of the new themes is the march for the Resistance lead by Leia, a determined and urgent martial fugue that harkens back to Williams’s scores of 1970s and 1980s when many of them sported one of these preparation sequences scored to this classical form. First hinted at in Rey Meets BB-8, it gets a full-blown rendition in Han and Leia, nestled in lovely and nostalgic readings of Leia’s theme, Han Solo and the Princess and the Force theme. For the album, Williams wrote a fully concertized version of the idea heard in the March of the Resistance, which is in this driving performance conducted by Williams’ good friend Gustavo Dudamel, the musical director of the Los Angeles Philharmonic, whom Williams brought to the sessions as a special surprise to the orchestra and who conducted several pieces on the album, including the Main Title, The Starkiller and the Finale end credits suite.

The album draws to a close with a burst of emotion with Farewell and the Trip, which opens up to a grand rendition of several themes, including the Force theme and Rey’s musical idea, and culminates in the most expansive full ensemble reading of her music thus far as the first leg of the hero’s journey is approaching its end. In the following Jedi Steps and Finale, Williams first unfolds a new mysterious and soaring theme full of dramatic significance, which rises to a version of the Force theme worthy of a binary sunset, before taking us into the classic end credits suite where the composer gives all his major new themes -Rey, Kylo Ren and the First Order, Finn and Poe, and the Resistance- a final bow in a rousing summation, that ends in a triumphant Rebel Fanfare followed by a wonderful interpolation of the Force and Rey’s themes, before perfectly fading into a gentle twinkling hint of Luke’s Theme.

In the final analysis, John Williams’s Star Wars: The Force Awakens is a Star Wars score through and through. It takes the well-known Romantic symphonic idiom and the sound of Star Wars and extends it further another chapter adding to the musical glossary of this universe. Its spirit is closer to the original trilogy of scores and in this way it goes back to the their more adventurous Romantic  style rather than further developing the musical language to the extent the composer did with the Prequels. But despite the score being an amalgam of much that has come before both in the music of Star Wars and in the inestimable maestro’s career stylistically, it shows how the 83-year-old Williams still keeps his pen and musical mind moving and forging ahead with continued energy, and strongly attests that his ability to evoke powerful emotion through his music and to communicate the drama so beautifully through his scores is undiminished.

The Walt Disney Records album, at generous 77 minutes, is a terrific listening experience that flies past in no time, and the recording brings out Williams’ well crafted orchestrations out in the best possible way. And fans can rest easy, as even though you can’t quite replace the incomparable London Symphony Orchestra, the music of Star Wars sounds to be in good and capable hands with the Hollywood Studio Orchestra, who give a strong and spirited performance. And while this score might not reach the lofty near sacred status of the original Star Wars score or recapture again that elusive glory that was the soundtrack for The Empire Strikes Back, I feel the music for the new film can proudly stand side-by-side with its predecessors as a worthy and thrilling successor in the on-going musical saga. Unreservedly recommended!